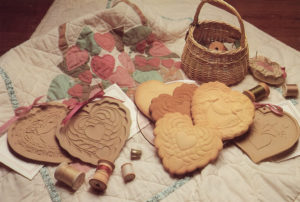 Was your mold made on a press or was it made one at a time by hand? ALL of the early designs were made by hand in our pottery shop in Hill, New Hampshire. As the business grew, we realized that we couldn’t keep up with the demand unless we had help from an outside manufactured who had a ram press and a big kiln.

By the late 1980’s most of our production was moved to outside vendors, though we always designed, sculpted and produced the master molds ourselves. Since many of the earliest designs were still in production when we made the switch, there were quite a few designs that were produced both by hand and by machine. All designs produced after 1988 were pressed, until 2002. All Shortbread Pans have been produced on a press.

Cookie molds produced by hand frequently have certain tell-tale characteristics. First, there may be an uneven spot about 1/2 inch wide on one edge. This is the location of the pouring funnel that carried the liquid slip into the plaster mold. When the slip hardened, the clay funnel was cut off. The spot was scraped and finished to make it smooth before the clay cookie mold was fired, but often there are sighs of where it once was. Clay, as potters say, has a “memory”.

The second way you may be able tell if your mold was made by hand is to look for a slightly darker streak across the mold. This can be on the front or the back of the piece. It will run from where the liquid slip poured through the funnel into the mold. The streak is the path of the slip, and is made up of a higher concentration of the iron bearing particles in the clay body.

The very special formula we use to produce Brown Bag Cookie Molds and Shortbread Pans gets its distinctive color primarily from iron. As the slip pours into the plaster casting mold, the plaster immediately starts to draw water from the fluid clay, and the heavy iron concentrates along the path. This is not a defect. It is rather like the uneven texture seen in raw silk. It adds character. Though the streaks in a particular design will always show up in the same location, (since the pouring funnel is in the same place in each casting mold for that design), no two are exactly alike. Not all hand cast molds show a streak.

Now, though a very few molds are being made by a press, almost all molds dated 2002 and later are again being made by hand, one at a time at our original pottery in Hill, New Hampshire.